This sale is for Adiós, Sabata (1970) with English Subtitles on DVD.

6.0
Director: Gianfranco ParoliniWriters: Renato Izzo, Gianfranco ParoliniStars: Yul Brynner, Dean Reed, Ignazio SpallaSummary: In Mexico, during the rule of the self-proclaimed Emperor of Mexico Maximillian (1864-1867), Mexican revolutionaries and Republican forces try to bring former Mexican President Benito Juárez back to power. The United States in neutral and is going through the pains of the American Civil War. Mexican guerrilla leader Señor Ocaño hires gunfighter Sabata to steal a wagon-load of gold from Emperor Maximillian's Austrian and French forces. When Sabata and his friends, Escudo and Ballantine, finally get their hands on a wagon, they discover it's full of sand rather than gold. They suspect that the gold was stolen by Austrian Colonel Skimmel. Therefore, Sabata and his partners set out to find the gold and give it to the Mexican revolutionaries. Written by nufs68
Also known as: Adiós, Sabata (on a region-free DVD).

Be the first to review “Adiós, Sabata (1970) with English Subtitles on DVD” Cancel reply 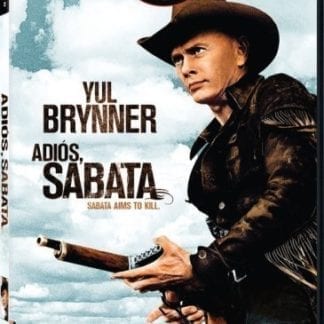