This sale is for A Young Connecticut Yankee in King Arthur’s Court (1995) starring Michael York on DVD.

4.9
Director: Ralph L. ThomasWriters: Frank Encarnacao, Ralph L. ThomasStars: Michael York, Theresa Russell, Nick MancusoSummary: Hank is a shy high school student in Connecticut who plays in a band with his friends. While trying to fix an amplifier for the band, he gets a shock and awakes in the land of a peasant. He is imprisoned by Alisande, who is the fiancée of Sir Galahad, and brought to the Court of King Arthur. Hank lures King Arthur and Merlin using his knowledge of an eclipse and succeeds to get a workshop to try to return to the future and Alisandre falls in love with him. Meanwhile, the evil Morgan Le Fay conspire with the knight Ulrich to overthrow King Arthur. Written by Claudio Carvalho, Rio de Janeiro, Brazil
Also known as: A Young Connecticut Yankee in King Arthur's Court (on a region-free DVD). 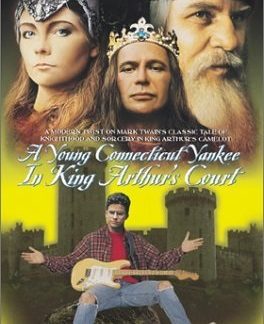