A Race of Giants: Our Forbidden History (2015) starring Paul Hughes on DVD


This sale is for A Race of Giants: Our Forbidden History (2015) starring Paul Hughes on DVD.

4.2
Director: J. Michael LongWriters: O.H. KrillStars: Paul Hughes, Simon OliverSummary: Legends throughout the world testify that giants once walked the Earth. The Bible tells of the Nephilim, giants who were "the sons of God and the daughters of man," but in the modern world this is thought to be a myth. But if these accounts are merely myth, how can we have skeletal remains of human giants that are eight to twelve feet tall, that have been discovered throughout the world and throughout history? In America alone, there have been over 1,500 newspaper accounts of giant skeletons being found, including 3,781 skeletons of a race of blond haired giants exhumed on Catalina Island, CA in 1920. The fact is, there are many credible accounts of such discoveries including giants with double rows of teeth, and in some cases six fingers. So where is the evidence? Many have accused the Smithsonian of a cover-up, because they deny that such specimens ever existed, but why? Explore the history, the mounting evidence, and the theories about this amazing chapter in our forbidden history.
Also known as: A Race of Giants: Our Forbidden History (on a region-free DVD).

Be the first to review “A Race of Giants: Our Forbidden History (2015) starring Paul Hughes on DVD” Cancel reply 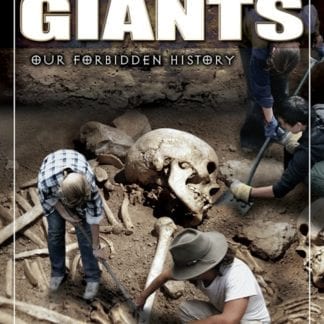