4.8
Director: Juan de OrduñaWriters: Raúl Cancio, Jaime García HerranzStars: Alfredo Mayo, Luis Peña, Manuel LunaSummary: In North Africa, in a detachment of the Legion (the 4th Flag), El Grajo ('the Rook'), the most courageous legionnaire, and Mauro, who have just joined, become close friends. Mauro, from whom only the name is known, gives the impression of hiding some disturbing secret. One day, when the two friends celebrate a party, an unfortunate circumstance leads to the death of a man. The suspicions fall on Mauro, who is put on trial. Meanwhile, El Grajo will begin to investigate the facts on his own. Written by jsanchez
Also known as: ¡A mí la legión! (on a region-free DVD).

Be the first to review “¡A mí la legión! (1942) with English Subtitles on DVD” Cancel reply 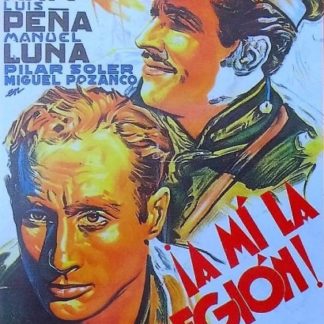