This sale is for A Man Called Gannon (1968) starring Anthony Franciosa on DVD.

5.4
Director: James GoldstoneWriters: D.D. Beauchamp, Borden ChaseStars: Anthony Franciosa, Michael Sarrazin, Judi WestSummary: After a range war in Texas in which he lost his brother and his ranch, former cattleman Gannon takes a freight train to Kansas. Between Kansas City and Union Wells, Gannon meets Jess Washburn, a tenderfoot from Philadelphia. On the train they witness the murder of the break-man at the hands of an itinerant hobo. In the small town of Union Wells, all those riding the freight train are detained by the local sheriff and his deputies. When Jess is accused of being the murderer, Gannon reveals the identity of the real killer and claims the reward money. Since the reward is to be paid within a few days, Jess and Gannon decide to remain in Union Wells. They lodge at the local cat-house where Gannon knows the lady-owner. Later, they get jobs at the Cross ranch. The ranch is owned by the attractive widow Beth Cross. Her outfit is run by tough foreman Capper. Eventually, both Jess and Gannon will often clash with Capper. During the spare time, Gannon teaches Jess how to be a cowboy, how to ... Written by nufs68
Also known as: A Man Called Gannon (on a region-free DVD). 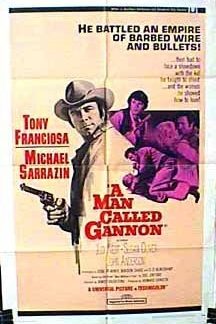