A Hole in My Heart (2004) with English Subtitles on DVD


This sale is for A Hole in My Heart (2004) with English Subtitles on DVD.

4.5
Director: Lukas MoodyssonWriters: Lukas MoodyssonStars: Thorsten Flinck, Björn Almroth, Sanna BrådingSummary: Eric is a teenager who lives in a shabby flat with his father, Rickard. Eric spends most of his time holed up in his room, blaring industrial music in order to drown out what's going on around him. He has just cause to be a bit disturbed by his surroundings -- Rickard is an amateur filmmaker specializing in extreme sex videos, and he's taken over the living room, where his emotionally disturbed friend Geko and a blank young woman, Tess are "starring" in his latest project. As shooting progresses over the course of several days, Rickard and his cast lose track of the outside world and become increasingly desensitized to their own decadence. As the sexual play becomes more and more extreme, edging into violence, Eric feels no choice but to intervene.
Also known as: A Hole in My Heart (on a region-free DVD). 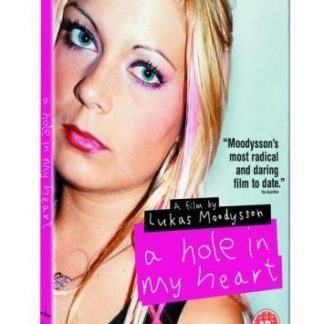