This sale is for A Gunfight (1971) starring Kirk Douglas on DVD.

6.4
Director: Lamont JohnsonWriters: Harold Jack BloomStars: Kirk Douglas, Johnny Cash, Jane AlexanderSummary: Will Tenneray and Abe Cross are two famous gunfighters who are getting old and need money. Cross tried his luck at gold prospecting but failed. Tenneray works at the local saloon where he capitalizes on his past fame to "sucker fools into buying drinks". The town expects them to become enemies and kill each other in a gunfight but the two aging gunfighters start liking one another. Desperate for money, Tenneray suggests to Cross to put on a show for the townsfolk and fight in an arena for money. The proceeds from the ticket sales would go to the winner of the gunfight. Both men like the idea of a paid show but hate the possibility of one of them killing the other. Written by nufs68
Also known as: A Gunfight (on a region-free DVD). 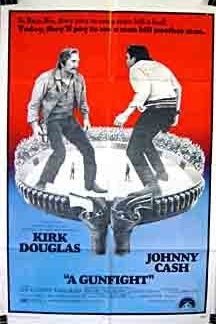