This sale is for A Dangerous Profession (1949) starring George Raft on DVD.

6.1
Director: Ted TetzlaffWriters: Martin Rackin, Warren DuffStars: George Raft, Ella Raines, Pat O'BrienSummary: Ex-policeman Vince Kane is a partner with Joe Farley as bail bond brokers, but retains his ties and friendship with the police and Detective Nick Ferrone. Ferrone picks up Claude Brackette, a brokerage clerk, as a suspect in the securities robbery in which a policeman was killed, and Kane goes with him when the detective searches Brackett's apartment, and Kane finds that Brackett's wife, Lucy, is his former sweetheart. She insists her husband is innocent and pleads with Kane to get him out on bail but she has only $4,000 of the $25,000 needed. A mysterious emissary puts up $12,000 and Kanes, over Farley's protest, makes up the rest from the company's money. Brackett is murdered after his release. For Lucy, Kane investigates and finds that Brackett had dealings with night club owner Jerry McKay and a hoodlum named Roy Collins. Suspecting McKay was in back of the robbery, Kane begins a campaign in which he himself behaves like a crook, and demands a heavy bride from McKay for his ... Written by Les Adams <[email protected]>
Also known as: A Dangerous Profession (on a region-free DVD). 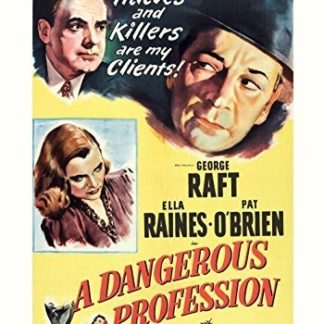