6.1
Director: Lloyd BaconWriters: Earl BaldwinStars: Joe E. Brown, Maxine Doyle, Frank McHughSummary: Small-town bumpkin Winfred Simpson is annoyed by the attention paid to his girl, Phyllis Jenkins, by a hotshot trick cyclist, Harry St. Clair, breezing through and impressing the locals on a personal appearance tour at the town theatre. When Phyllis turns Winfred down, he hits the road to become a success at the big 6-Day bike race. He meets Clinton Hemmings and they become partners as it is a two-man event, and get practice time for the race by getting jobs as bicycle messengers. Winfred, delivering a message to St. Clair at his hotel, mistakes a voice he hears in St. Clair's room as Phyllis, gets into a fight with him and hauled off to the pokey. The race starts without him, with Clinton riding alone. Finally getting released from jail, Winfred races on a "borrowed" bike to the "Velodrome" and enters the race just in time. An ether-saturated cloth, caught in his rear-wheel spokes, aids him more than a little as the other riders are overcome from the fumes when they try to pass him. Written by Les Adams <[email protected]>
Also known as: 6 Day Bike Rider (on a region-free DVD). 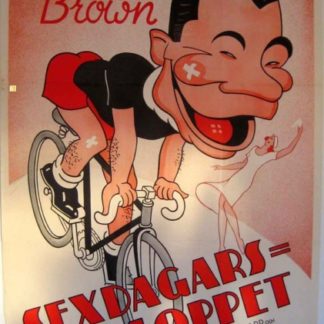