View cart “The Concrete Jungle (1982) starring Jill St. John on DVD” has been added to your cart.


This sale is for Yuan fu kuang wa feng sha shou (1980) with English Subtitles on DVD.

4.8
Director: Chi LuWriters: Chi LuStars: Ti Ai, Dai Ling, Ching TangSummary: Sexy Pei Pei and her older husband Harry make love with no idea they are being spied on by the pervert next door. His dingy apartment is covered wall-to-wall with photos of hers, but thus far the only outlet for his obsession is his inflatable doll. While Harry is at work, she spends her afternoon with a women's group led by her cousin Fifi, of whom her husband does not approve. That is because she divorced her adulterous husband Michael and now cavorts with a young gigolo called Philip. After hearing Fifi's story, Pei Pei is adamant her man will never stray, but little does she know Harry is having an affair with sexy bikini model Betty.
Also known as: Yuan fu kuang wa feng sha shou (on a region-free DVD). 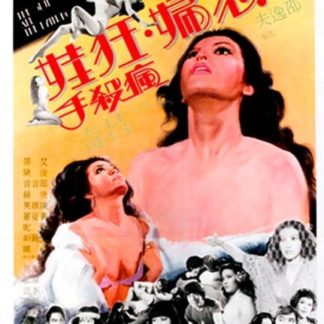