This sale is for Young Daniel Boone (1950) starring David Bruce on DVD.

5.5
Director: Reginald Le BorgWriters: Clint JohnstonStars: David Bruce, Kristine Miller, Damian O'FlynnSummary: Frontier scout Daniel Boone is sent out to locate the only two survivors of General Braddock's men that are believed two have lived through an Indian massacre. One of the survivors, CHarlie Bryan, witnessed the capture of his two daughters, Rebecca and Helen, by the Indians. Boone succeeds in locating and rescuing the women. Shorty afterwards, the Boone party is joined by Captain Fraser, who proves to be an intelligence officer in the French forces, and Boone's small group is captured. An Indian attack is diverted and the tables are turned in favor of the British forces. Boone kills Captain Fraser, and looks forward to a happy future in Kentucky with Rebecca. Written by Les Adams <[email protected]>
Also known as: Young Daniel Boone (on a region-free DVD). 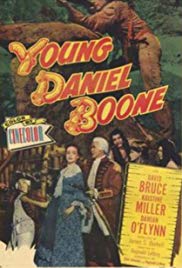