This sale is for Wallflower (1948) starring Robert Hutton on DVD.

6.5
Director: Frederick De CordovaWriters: Reginald Denham, Henry EphronStars: Robert Hutton, Joyce Reynolds, Janis PaigeSummary: Joy (Janis Paige) is used to getting male attention, while her step-sister, Jackie (Joyce Reynolds), stands on the sidelines. The pair, who have a strong bond, come home from college and meet the handsome Warren (Robert Hutton) at a dance. Despite initially being attracted to Jackie, those feelings are instantly forgotten when he meets Joy. The two sisters vie for his attention, and Jackie decides to undergo a makeover in order to gain his affections. Her makeover has surprising consequences. Written by Lloyd Purvis
Also known as: Wallflower (on a region-free DVD). 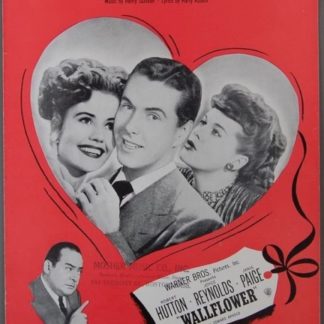