View cart “Coyote (1956) with English Subtitles on DVD” has been added to your cart.


This sale is for The Heart of an Indian Maid (1911) with English Subtitles on DVD.

5.2
Stars: Pearl WhiteSummary: A party of trappers is attacked by Indians and all escape but one, who is badly wounded. The Indians, however, start in pursuit of the fleeing trappers and the wounded man is found by Winonah and taken to camp, where she nurses him back to health, saving his life by pleading with the chief. Upon his recovery he becomes a blood brother of the tribe by the intermingling of blood from his wrist with that of the chief. This ceremony over, Winonah is given to him as his wife. Some time later, however, our hero makes his escape and returns to his real wife and child. He is seen and followed, however, by an Indian who was in love with Winonah, and this Indian reports his whereabouts to the chief, who determined to kill him. Winonah, however, overhearing the conversation, begs the privilege of taking her own revenge, and armed with a long knife, she starts on the tiresome journey to the white man's house. Footsore and weary she finally reaches a house in the clearing and sinks down exhausted.... Written by Moving Picture World synopsis
Also known as: The Heart of an Indian Maid (on a region-free DVD). 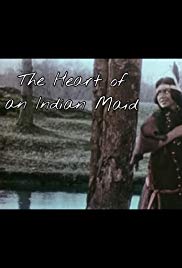