View cart “Ice Cream Man (1995) starring Clint Howard on DVD” has been added to your cart.


This sale is for Seven Days’ Leave (1942) starring Victor Mature on DVD.

5.9
Director: Tim WhelanWriters: William Bowers, Ralph SpenceStars: Victor Mature, Lucille Ball, Harold PearySummary: Soldier Johnny Grey is engaged to marry singer Mapy Cortes, but his plans go awry when he learns that he is the heir to $100,000 from his great-grandfather -- a bequest that comes with a catch: before claiming the money, Johnny must marry a descendant of his great-grandfather's Civil War enemy, General Havelock-Allen. Not wanting to disrupt his planned marriage to Mapy, Johnny must figure out how to concoct a temporary marriage-of-convenience with the descendant -- who turns out to be the beautiful Terry Havelock-Allen. Written by Jim Beaver <[email protected]>
Also known as: Seven Days' Leave (on a region-free DVD). 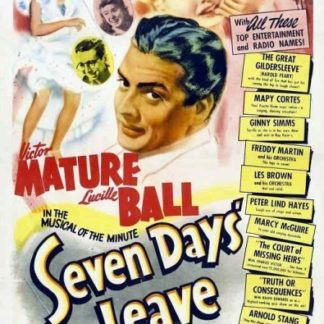