View cart “Top of the World (1955) starring Dale Robertson on DVD” has been added to your cart.


This sale is for Sergeant Klems (1971) with English Subtitles on DVD.

6.5
Director: Sergio GriecoWriters: Bruno Di Geronimo, Sergio GriecoStars: Peter Strauss, Tina Aumont, Pier Paolo CapponiSummary: During the final days of world war one, a German army deserter steals the identity of a dead German soldier. His new name is Otto Josef Klems. After the war, he joins the French Foreign Legion as Sergeant Otto Josef Klems. The year 1924 finds him in a French Foreign Legion garrison in French Morocco. Two European powers, France and Spain, control colonial Morocco. However, both colonial powers face strong rebellions from the local Moroccan tribes that unite in order to defeat the European armies and achieve independence for Morocco. During the course of his duties in Morocco, Sergeant Klems runs afoul of a new brutal commanding officer, a Captain. Disgusted by his Captain's behavior and by the treatment of locals at the hands of the French troops, Sergeant Klems decides to desert. It seems that others, too, had the same idea, since many native troops desert the French garrison at night. On such a night, Sergeant Klems is on duty and surprises a group of French soldiers of native ... Written by nufs68
Also known as: Sergeant Klems (on a region-free DVD). 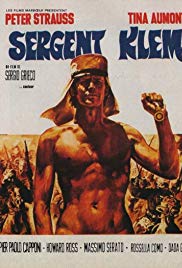