This sale is for Lobster Man from Mars (1989) starring Deborah Foreman on DVD.

5.5
Director: Stanley SheffWriters: Bob Greenberg, Stanley SheffStars: Deborah Foreman, S.D. Nemeth, Anthony HickoxSummary: Movie mogul J.P. Shelldrake discovers he's in desperate need of a tax write-off to keep the Internal Revenue Service off his back. Young writer, producer and director Stevie Horowitz walks in the studio with his homemade space parody "Lobster Man From Mars". What follows is one of the most bizarre and funny film within-a-film send-ups: Mars suffers from a severe air leakage, and the King of Mars sends the dreaded Lobster Man to Earth to steal its air. The Lobster Man's plot is foiled by a mad scientist, an army colonel, and a young and innocent woman. Shelldrake buys the movie, which makes a huge profit and sends Shelldrake to tax prison, with Stevie taking his place as the studio mogul. Written by <[email protected]>
Also known as: Lobster Man from Mars (on a region-free DVD). 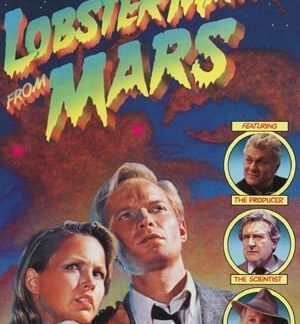