View cart “The Ballad of the Green Wood (1983) with English Subtitles on DVD” has been added to your cart.

6.6
Director: Antonio MargheritiWriters: Italo Fasan, Antonio MargheritiStars: Dalida, Alberto Lupo, Marisa QuattriniSummary: During an air trip, Prince Tancredi, a well-known abstract artist, gets to know air hostess Judy and is charmed by the young woman. When he asks her to pose for him Judy accepts. Following a few negative remarks on her part about his work Tancredi is driven to question himself artistically. Now, Judy has to leave but she promises to see Tancredi again, which they do. Their mutual attraction soon turns into a burning passion. As Judy will soon benefit from a week off they promise each other to live this blessed period to the full. The young woman leaves, Tancredi returns to his studio and works hard at her portrait, bringing it the magic of his sincere, intense feelings. When the time comes to join Judy, he learns in horror that she got killed in a car accident the very day when she had left him while she had decided to drive back and was happily returning to him. Written by Guy Bellinger
Also known as: Io ti amo (on a region-free DVD). 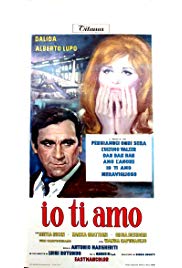