This sale is for Hungry for Monsters (2004) starring C. Renee Althaus on DVD.

7.0
Director: George Paul CsicseryWriters: Richard Brzustowicz Jr.Stars: C. Renee Althaus, Nicole Althaus, Rick AlthausSummary: In the early 1990s, teenager Nicole Althaus began an unlikely friendship with a teacher at her high school. Soon after, she accused her father of sexual abuse and rape. Local law enforcement arrested the father, and pursued a case against another couple as well. A psychiatrist diagnosed Nicole as having post-traumatic stress disorder, brought on by sexual abuse. As Nicole's stories and accusations became even more wild (murder, a woman flying around on a broomstick, etc.), one police detective became skeptical. Eventually the charges were dropped. Nicole sued the psychiatrist in civil court, and won. Written by Ken Miller <[email protected]>
Source: imdb.com

Be the first to review “Hungry for Monsters (2004) starring C. Renee Althaus on DVD” Cancel reply 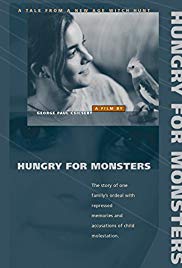