View cart “Dr. Frankenstein on Campus (1970) starring Robin Ward on DVD” has been added to your cart.


This sale is for Dr. Frankenstein on Campus (1970) starring Robin Ward on DVD.

4.3
Director: Gilbert W. TaylorWriters: David Cobb, William T. MarshallStars: Robin Ward, Kathleen Sawyer, Austin WillisSummary: Viktor Frankenstein, expelled from Ingoldstat U for doing weird experiments and for acting a bit looney, goes to college in Canada to study brain control under Prof. Preston. Campus radicals frame Viktor (photographed holding a joint) in an attempt to discredit both Preston and the Dean and Viktor is once again expelled. Vik injects Tae Kwan Do expert Tony with his new brain control pellets and soon Tony becomes an instrument of revenge, beating radicals to death, drowning the photographer in a developing tray, and karate-chopping a reporter in the throat to name a few. But why won't Viktor remove his clothes when doing his often naked girlfriend and who is the "real Frankenstein"? Written by Charlie Phelps <[email protected]>
Also known as: Dr. Frankenstein on Campus (on a region-free DVD).

Be the first to review “Dr. Frankenstein on Campus (1970) starring Robin Ward on DVD” Cancel reply 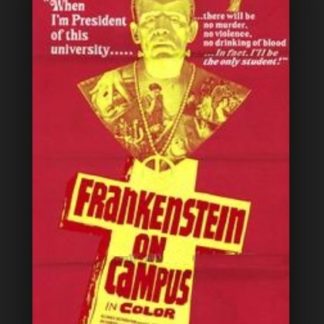