Come Spy with Me (1967) starring Troy Donahue on DVD


This sale is for Come Spy with Me (1967) starring Troy Donahue on DVD.

5.3
Director: Marshall StoneWriters: Cherney Berg, Stuart JamesStars: Troy Donahue, Andrea Dromm, Albert DekkerSummary: U.S. Intelligence assigns Jill Parsons to investigate the mysterious deaths of two secret agents in the Caribbean. The agency fears that the deaths may indicate danger to a meeting of foreign ministers scheduled to be held aboard an aircraft carrier in the area. Jill infiltrates a local skin-diving competition to be held off a charter boat belonging to young Pete Barker. Meanwhile, the activities of the skin-divers are being carefully observed by enemy agent Walter Ludeker, who has been laying highly explosive equipment across the ocean beds. In an attempt to learn if a U. S. agent is among the divers, he persuades his nephew Larry to enter the competition. Though another woman, Samantha, is wrongly suspected and kidnapped, Ludeker later realizes that it is Jill he wants, and he abducts her also.
Also known as: Come Spy with Me (on a region-free DVD). 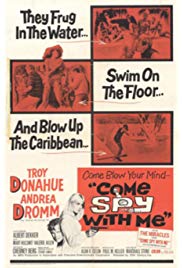