Buried in the Backyard (2005) starring Steve Harris on DVD


This sale is for Buried in the Backyard (2005) starring Steve Harris on DVD.

6.6
Director: Monica Bigler, Sarah PriorWriters: Monica Bigler, Sarah PriorStars: Steve Harris, Sharon Packer, Andre RambaudSummary: Has the bomb shelter reached the American mainstream, or just a wider swath of the lunatic fringe? Buried in the Backyard is a documentary about people in the United States who are actively engaged in preparations for nuclear attack. Meet Andre, living alone in the mountains of New England, tending his campground, his public and private bomb shelters, and the ashes of his wife. And Steve, whose Michigan basement contains a plywood shelter shored up with several years' worth of food and water. And meet the hard core believers, like Utah Shelter Systems co-owners Sharon and Paul, who both keep several bomb shelters- including some in remote locations where they plan to escape from the human chaos when a nuclear war begins. But there are also the more average Americans, like Don and Barbara, whose suburban cement safe room is attached to a basement full of exercise equipment, a never-used pool table, and a year's worth of stored food and water. In Utah, the dirt mound that shields the ... Written by Sarah Prior
Also known as: Buried in the Backyard (on a region-free DVD).
Source: imdb.com 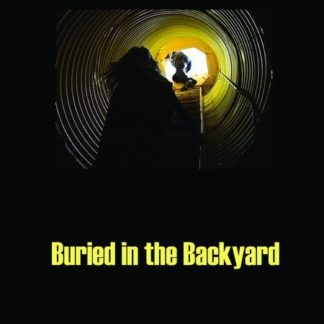