As You Desire Me (1932) starring Greta Garbo on DVD


This sale is for As You Desire Me (1932) starring Greta Garbo on DVD.

6.4
Director: George FitzmauriceWriters: Luigi Pirandello, Gene MarkeyStars: Greta Garbo, Melvyn Douglas, Erich von StroheimSummary: Budapest bar entertainer Zara is a discontented alcoholic who is pursued by many men but lives with novelist Carl Salter. A strange man (Tony) shows up on Salter's estate claiming that Zara is actually Maria, the wife of his close friend Bruno. Maria, Tony claims, had her memory destroyed during a World War I invasion ten years ago. Zara doesn't remember but leaves with Tony to Salter's dismay. Bruno, now an officer in the Italian army, tries to coax Maria's memory back on his large estate. No one is really sure if Zara is Maria, and when Salter shows up with a mental case that he claims is the real Maria, everyone on Bruno's estate is desperately searching for the truth. Written by Gary Jackson <[email protected]>
Also known as: As You Desire Me (on a region-free DVD). 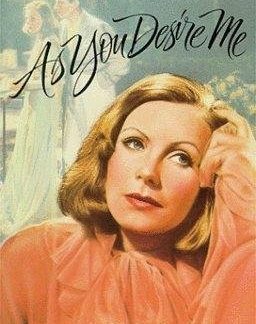