View cart “The Hound of the Baskervilles (1983) starring Ian Richardson on DVD” has been added to your cart.

Anthony, Warrior of God (2006) with English Subtitles on DVD


This sale is for Anthony, Warrior of God (2006) with English Subtitles on DVD.

6.3
Director: Antonello BellucoWriters: Antonello BellucoStars: Jordi Mollà, Paolo De Vita, Matt PatresiSummary: The life of Anthony of Padua (1195-1231) from his arrival on Sicily's shores via shipwreck in 1221 to his death. He's a Portuguese monk who, once in Italy, seeks out St. Francis. Anthony's gift as a great preacher is discovered by happenstance. He spends much of his life in and near Padua, a city run by usurers. Anthony offers protection and friendship to Folco, at one time a petty criminal and acolyte to the usurers, later falsely accused of murder. Anthony's teaching and his spiritual strength lead to changes in the character of Padua and an end to usury. He became its patron Saint soon after his death, and 32 years later, his casket is opened and his tongue remains intact. Written by <[email protected]>
Also known as: Anthony, Warrior of God (on a region-free DVD).

Be the first to review “Anthony, Warrior of God (2006) with English Subtitles on DVD” Cancel reply 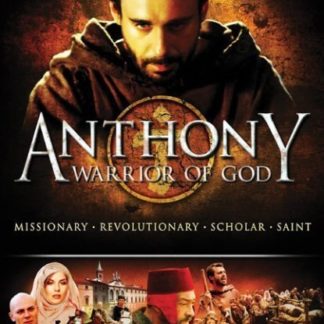