View cart “Hissatsu shikakenin: Baian ari jigoku (1973) with English Subtitles on DVD” has been added to your cart.

An Awesome Tale (2008) with English Subtitles on DVD


This sale is for An Awesome Tale (2008) with English Subtitles on DVD.

7.7
Director: Roman ShirmanWriters: Violetta GattiStars: Boris Barsky, Georgiy Deliev, Volodymyr Kozyr Jr.Summary: Once upon a time there were two Kingdoms: the Militant Kingdom and the Unhappy Kingdom. The intrigues of the Secret Service of the Militant Kingdom made young Princess of the Unhappy Kingdom run away from home... The plot of the film is based on the travels and adventures of the Princess, who eventually meets the young King of the Militant Kingdom. Unlike his Military Minister he does not want to wage war. Understandably, love flares up between them... After a great many captivating, funny, touching and sometimes dangerous adventures, they are united by Destiny, represented by a charming, yet very young girl. Peace, prosperity and happiness now rule the two Kingdoms. Written by Olena Fetisova
Also known as: An Awesome Tale (on a region-free DVD). 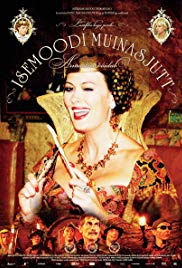