View cart “Felicity (1978) starring Glory Annen on DVD” has been added to your cart.


This sale is for Allyson Is Watching (1997) starring Caroline Ambrose on DVD.

5.0
Director: Robert KubilosWriters: David Keith MillerStars: Caroline Ambrose, James Horan, David AndrioleSummary: Innocent, sexy Allyson leaves her boyfriend Peter to go to acting classes in Los Angeles. In Los Angeles she rents a room in an apartment building from the grumpy Mr. Merry next to the resident working girl, Bridget. During the day Allyson struggles with her acting lessons at arrogant Eric Constantine's acting school whilst at night she plays with herself as she watches beautiful, confident Bridget through the keyhole servicing her clients. In class she meets professional photographer Jerry who offers to shoot her a portfolio. Eric asks the pair to rehearse a hot scene as an exercise for class. In her apartment Jerry gets carried away rehearsing and attempts to rape Allyson. Luckily Bridget rescues her just in time and later when Eric discovers what has happened Jerry is thrown out of the class. Eric continues to rehearse Allyson as this scene is, in fact, for a real part in a film. Allyson draws on Bridget's extensive experience as a prostitute to help her in the role. One night a ... Written by Mark Smith <[email protected]>
Also known as: Allyson Is Watching (on a region-free DVD). 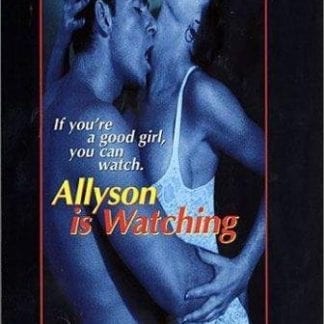