This sale is for A Southern Yankee (1948) starring Red Skelton on DVD.

Director: Edward Sedgwick, S. Sylvan SimonWriters: Melvin Frank, Norman PanamaStars: Red Skelton, Brian Donlevy, Arlene DahlSummary: Aubrey Filmore (Red Skelton) is a bumbling bellboy in a Missouri town who pesters the Union officers there; he desperately wants to be a spy for the North in the American Civil War. When Filmore accidentally waylays an infamous Confederate spy known as "The Grey Spider" and is mistaken for him by the Rebels, the Union brass see it as an opportunity for real espionage - and though Filmore is a coward as well as a fool, his real motivation for derring-do is a sweet Southern girl named Sallyann, whom he will see again behind Southern lines. Written by Gary Dickerson <[email protected]>
Also known as: A Southern Yankee (on a region-free DVD). 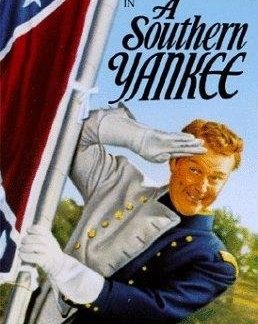