5.6
Director: Alberto De MartinoWriters: Alfonso BalcázarStars: Richard Harrison, Fernando Sancho, Luis InduniSummary: A stranger named Lee Barton rides into the western town of Rainbow Valley where he's mistaken for a former resident named Ward Cluster who was believed killed in the Civil War. Cluster's wife, Rose, is now dead but his young son, Sean -- raised by Indian chief, Gray Bear -- also believes Barton to be his father. Barton soon finds himself in opposition to local boss Tom Cherry who used local Indians to drive off settlers and who then turned against the Indians. Cherry is "sweet" on blonde townswoman Deborah but Deborah loves a drunken man named Ive. Cherry seeks to find $200,000 stashed away by a Mexican general and during the course of his hunt captures and flogs Barton and then kills both Deborah and Ive. Barton, having joined forces with a wandering sheriff from Tucson, kills Cherry in a shoot-out, finds the missing money, and plans a future with adopted son, Sean. Written by dinky-4 of Minneapolis
Also known as: One Hundred Thousand Dollars for Ringo (on a region-free DVD).
Source: imdb.com 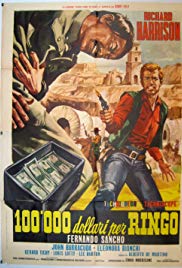